June last year was dedicated to a pilgrimage around the Emerald Isle, with an old friend.  One of the places we stopped at, was a small town, called Glencolmcille Donegal on the North West coast of Southern Ireland.

About a mile before entering the town, we stumbled upon an old  house.  At first glance it looked like someone lived there, until I focused on curtains that were gently caught in the breeze, out of a broken window pane. The front door was missing most of its middle panels, and the innards of the house appeared to have sadly prolapsed unable to hold up against the constant rain, no longer held back by the partly missing shingled roof.

As unsafe as the house obviously was, I couldn’t help venturing in to investigate. For me, it was a strange feeling, like time had both stood still and jumped ahead 10 years.  The tea pot  stood untouched on the kitchen table, the cans of food and the cooking pots, still sat neatly on the pantry shelfs, the toilet seat cover was still in place, and the clock in the rubble, frozen in time.

Later, I asked a man I met, about the houses story and he told me what little he knew, but promised to introduce me to another man down the pub, who may have known more than he.  It was the day after summer solstice with its longest daylight hours.   Being a workday, the pub goers all waited until dark, so around 11pm, when the sun had finally gone down, and the twilight grew thicker, we followed the sounds of Celtic music, to the warm glow of the pub.   Once the curiosity of  us being new strangers in town settled and the staring lessoned to friendly smiles, I was taken over and introduced to a man at the bar nursing a pint of Guinness.  I asked about the derelict house, I wanted to know who had lived there and what had happened for it to be frozen in time that way and then neglected.

He thought about the house for a moment, declared he never really knew the old man who lived there, but knew he was an old Shin Fein patriot, and they had met briefly one day.   Most days the old man would sit by the side of the road with a stick and chat to passers by.  This particular day, the old man pulled him up as he was wandering along preparing to thumb a lift and told him he wanted to show him something.  He was led to a spot near the side of the road, where a pile of stones where scattered around, they had formed three animals, one was a horse, one was a rat and the other a rabbit.

Then he remembered his name.   ‘Old  Donavan’ he called him,  he lived in that two story house down at the ‘Nord’ all his life and when the house was declared unsafe, and having no money to repair it, the old man was ordered to vacate it, so he slept in a caravan parked next to his house, and continued to visit the house daily, cooking his meals and sitting at his kitchen table drinking tea until the day he died.

They carted his body and the caravan away, and locked the door, leaving everything else untouched. 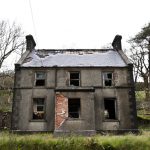 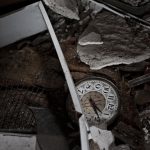 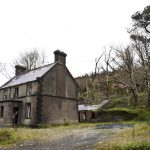 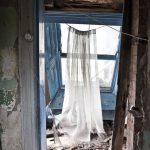 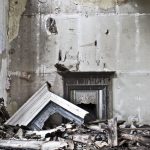 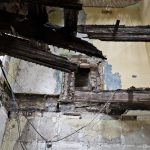 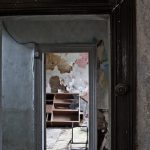 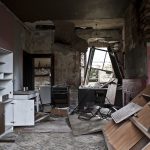 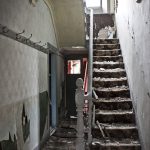 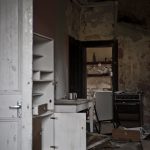 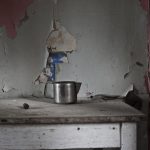 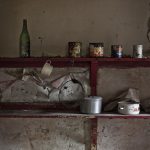 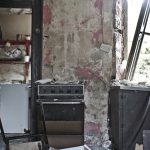 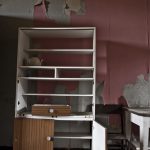 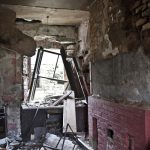 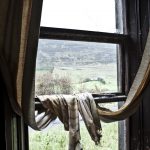 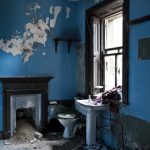 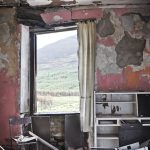 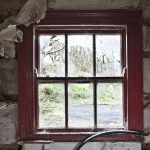 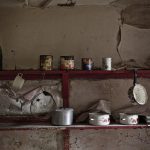